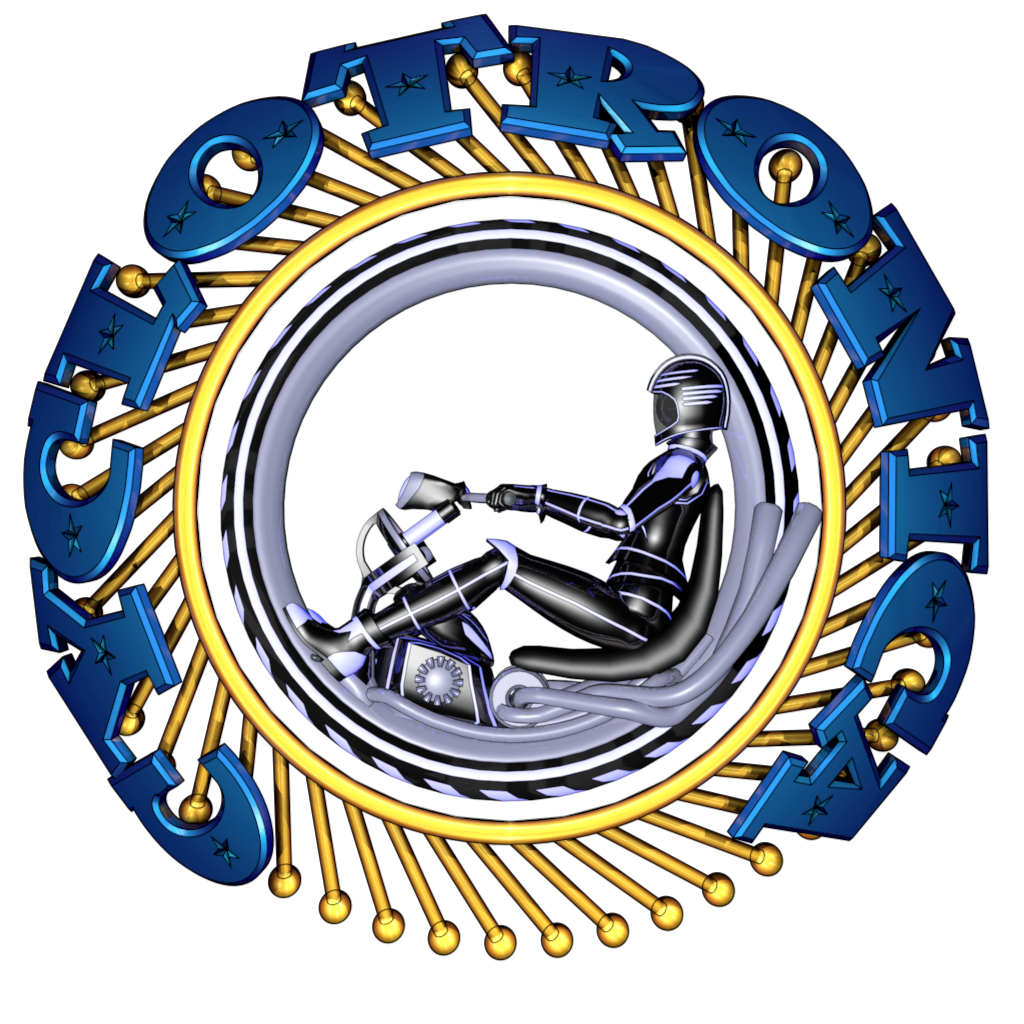 Do you want to learn a little bit about nuclear physics and blow stuff up without being designated a terrorist or getting radiation poisoning? We've got you covered, kid.

Race through and perform experiments inside some of the most dangerous and expensive environments ever constructed!

Did we mention dangerous and expensive? This game is neither!

All within a fraction of a second! (Perceived game time may vary. See your participating consciousness for details.) 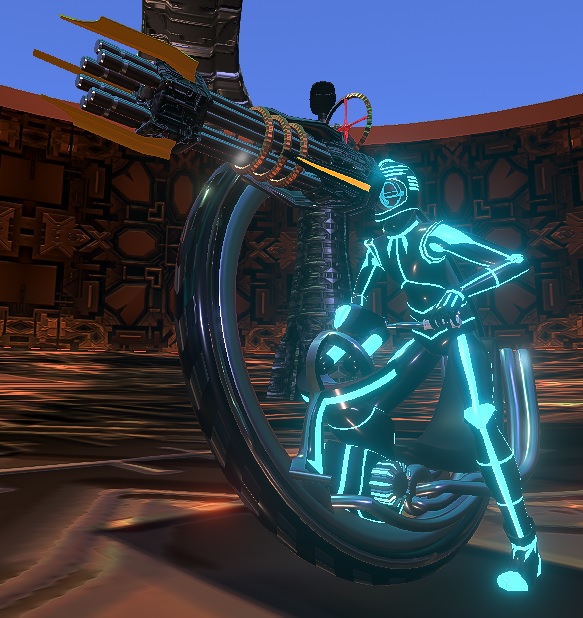 A game both inspired and undaunted by the inaccessibility of the test chamber, the hard vacuum, the inside of a reactor, the crucible. Cyclotronica seeks to bring the lofty world of nuclear physics home to kids of all ages. Fission and fusion, chemistry, electromagnetism, the thrill of creation and destruction, and the balance of each. We wanted to make a game that respected the rules of our living world, with enough fidelity to deliver real lessons, and enough flexibility to keep it fun.

Our idea is for the player to be at the epicenter of the danger. All of the places where you can't look with your own eyes, shouldn't stick your hands, shouldn't approach with your body - that's where we want to put the player. The collection of knowledge, the dealing of damage.

The tests performed by nuclear physicists involve fantastically large devices, employing immense forces on small targets. Many are designed like a racetrack to begin with, why not? We want to put the player in the middle of the experiments. Not necessarily drawn to scale, but drawn to the interaction. 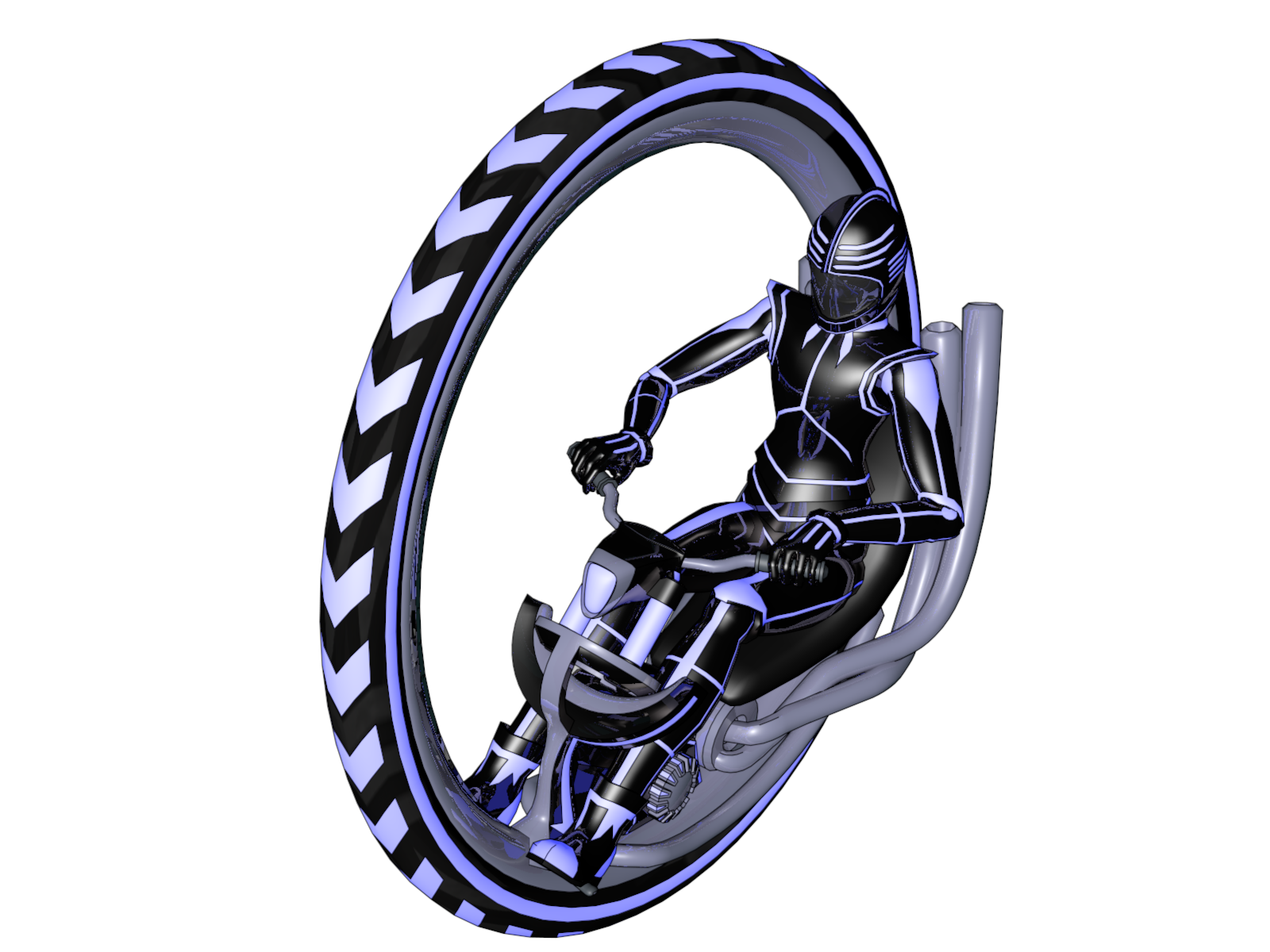 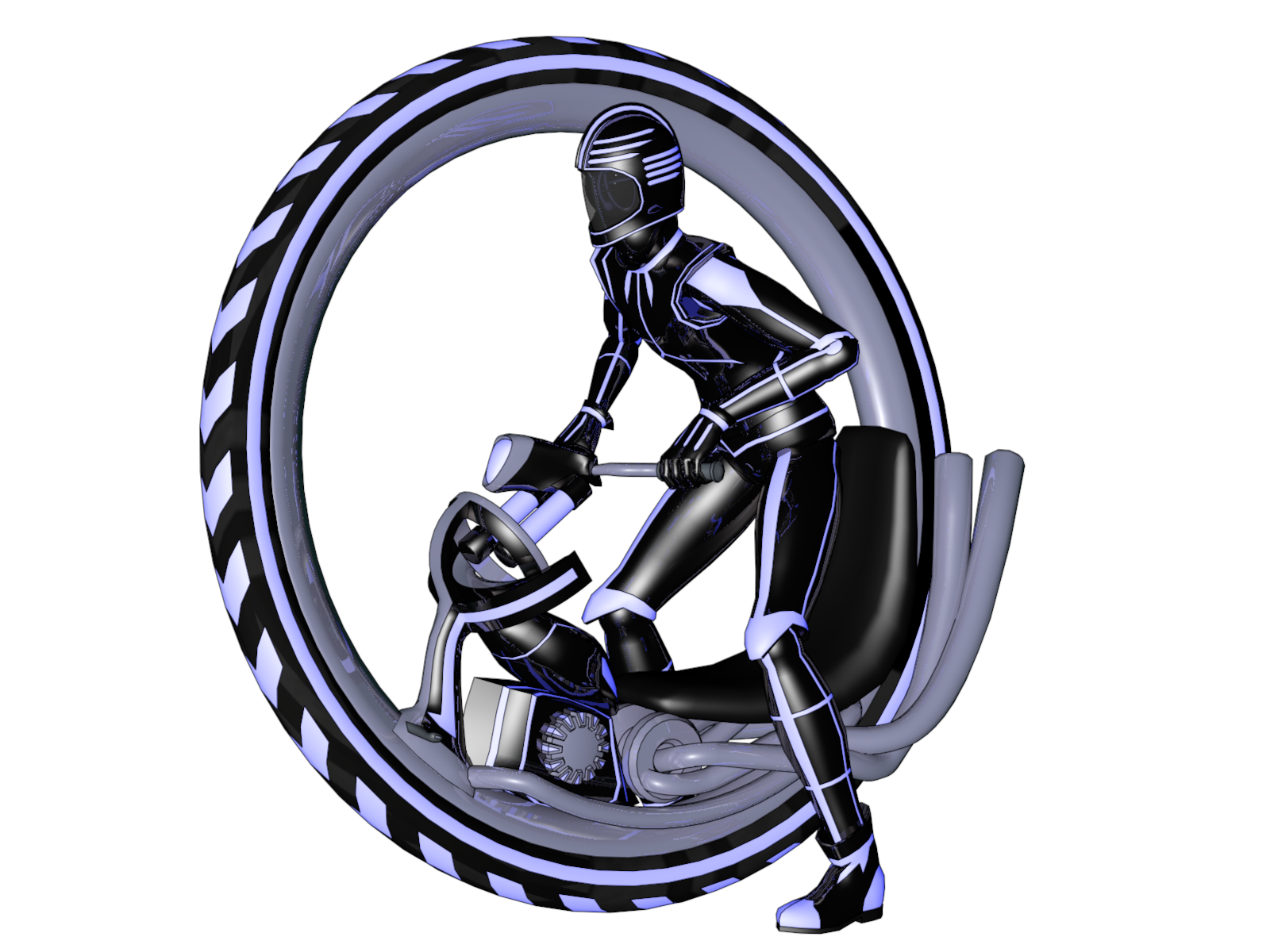 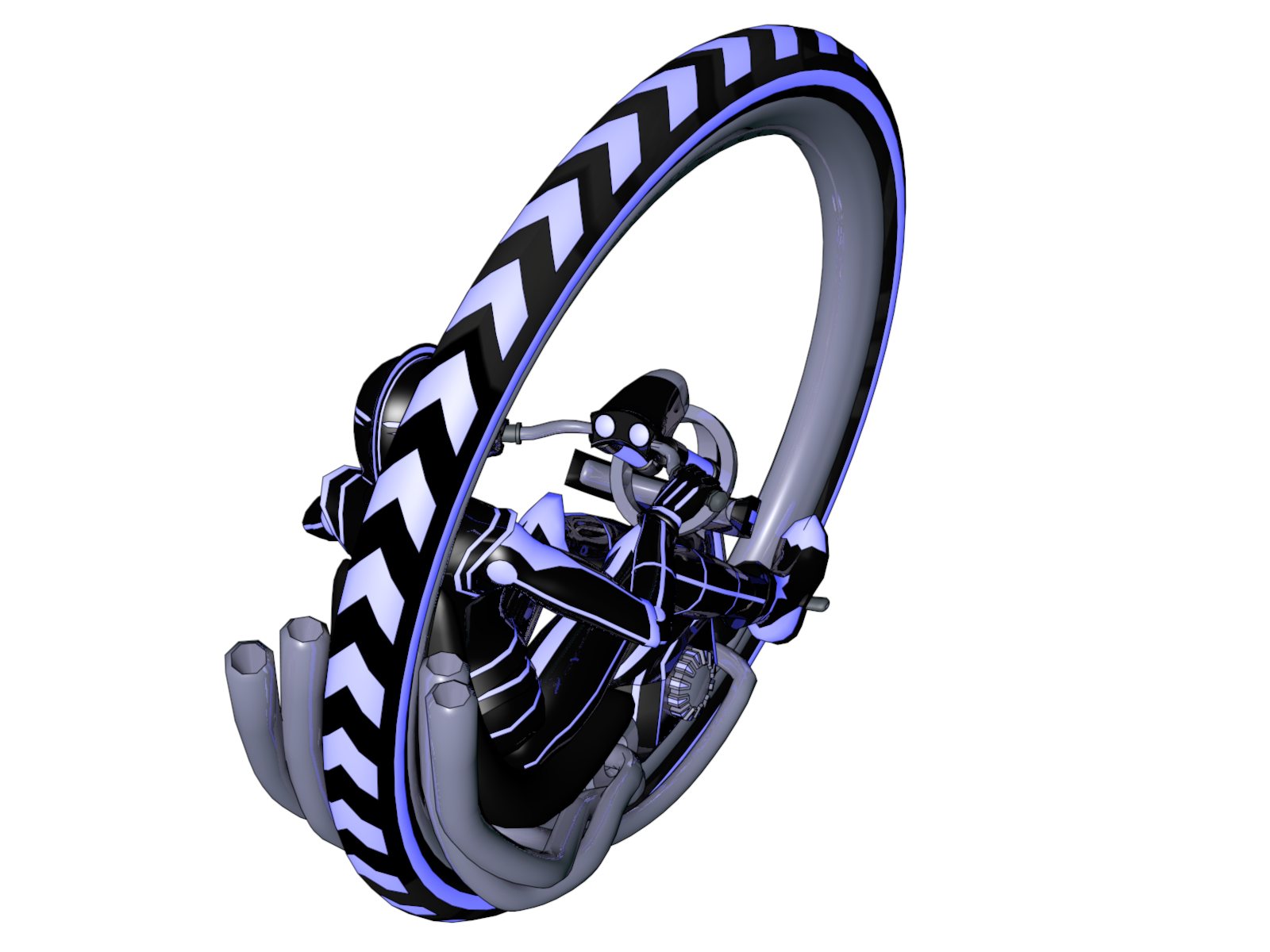 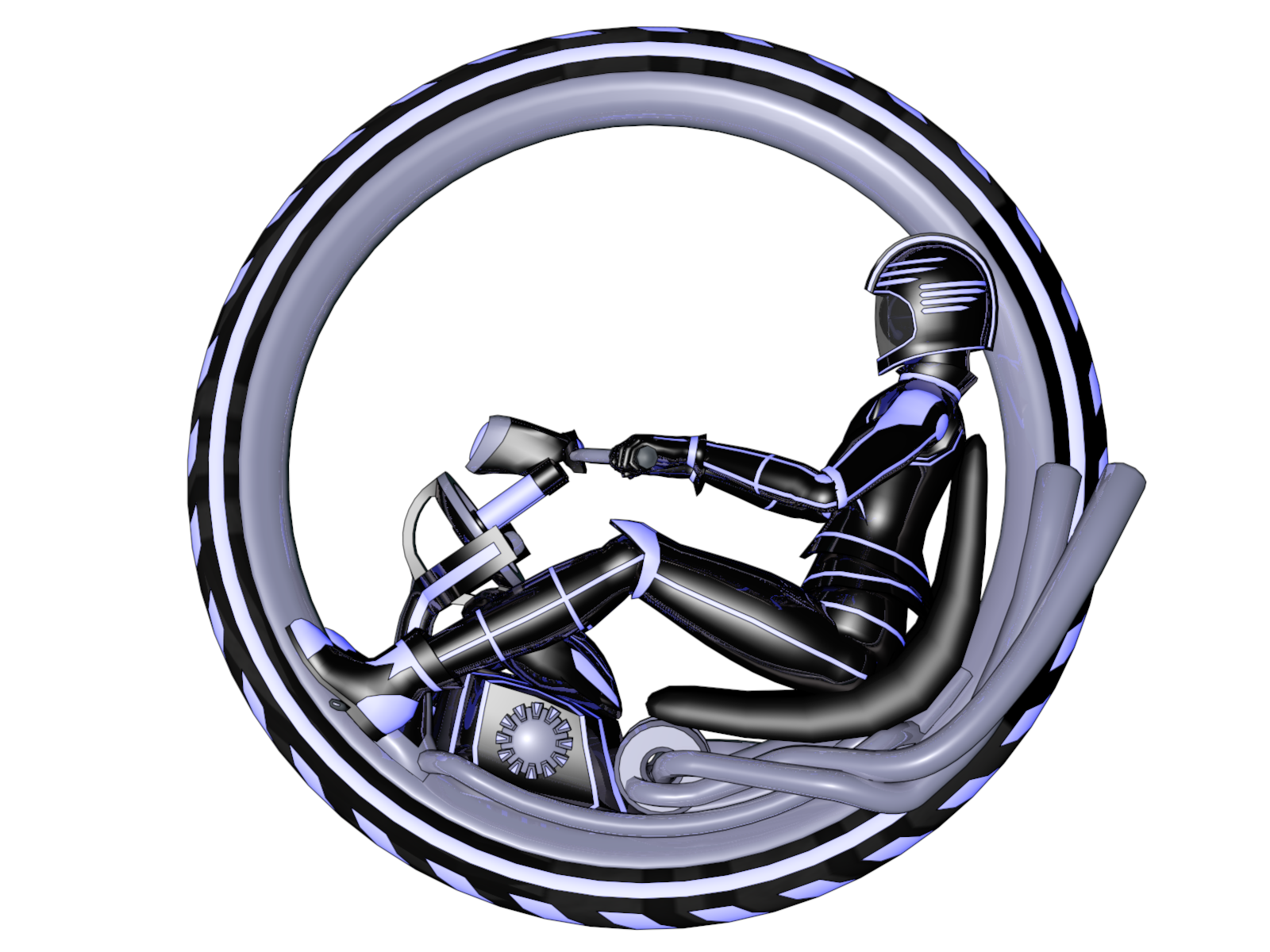 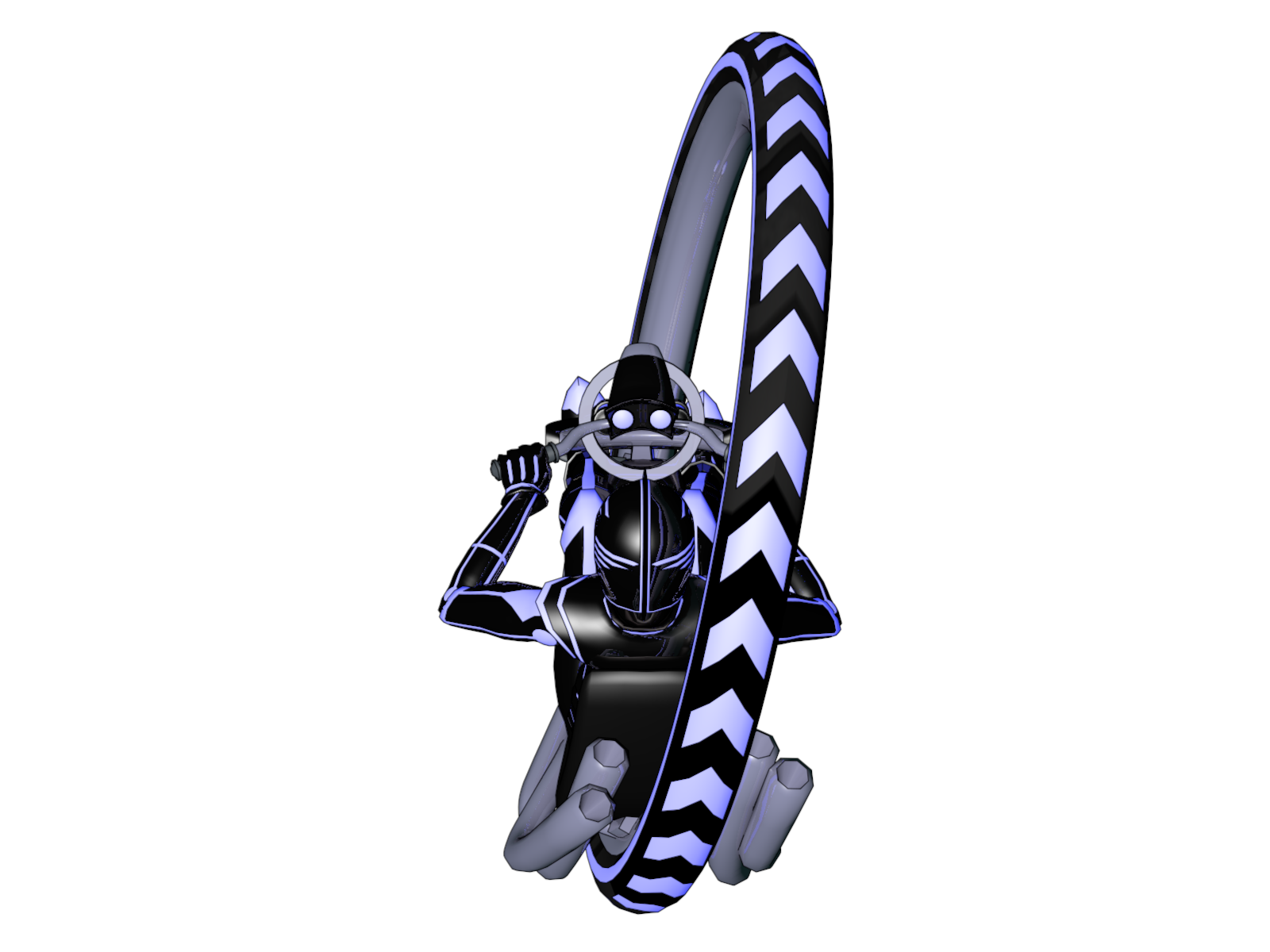 In Cyclotronica, players explore a host of experimental chambers and tunnels as "Mr. Big", the ironically tiny rider of an ultra-high tech monowheel cycle made from torquium nanides -- a fictitious material strong enough to deal with the stress of gameplay and with enough gyroscopic power to stick to walls and hold subatomic particles in inventory for long enough to fuse or use them up.

Mr. Big's cycle is equipped with one all-purpose weapon: the S.C.I.E.N.C.E. Gun -- or Spin Coalescing Integral Energy aNd Coupling Emitter; it will load and fire just about any ammo you can craft or collect.

We have selected a series of experiments for the initial release of the game to showcase the mechanics: Ionizaton Tracks, Tokamak-style Fusion chambers for creating Elements, Neutron bombardment to refine custom Isotopes, Quantum Entanglement Rube Goldberg devices, a plan to avert the Chernobyl Nuclear Disaster in a scale model of the original RMBK reactors used in the Soviet Union, a more Sci-Fi styled experiment where you try to destroy a Singularity, and a Superheavy Element experiment where you create Oganesson, the heaviest currently known Element of the Period Table. These experiments all combine various forms of puzzles and free-riding in addition to aspects of shoot-em-up games and item crafting. 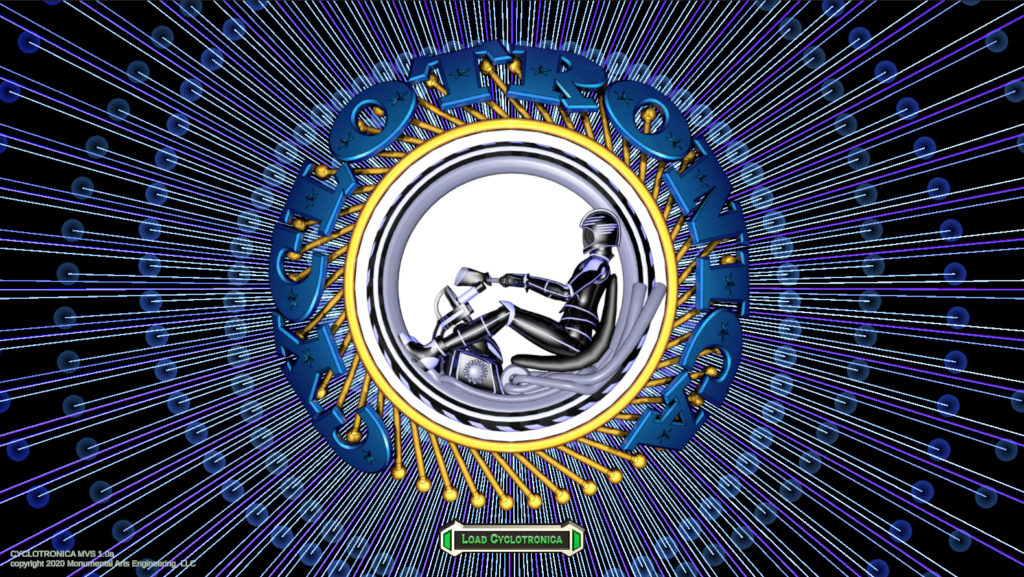 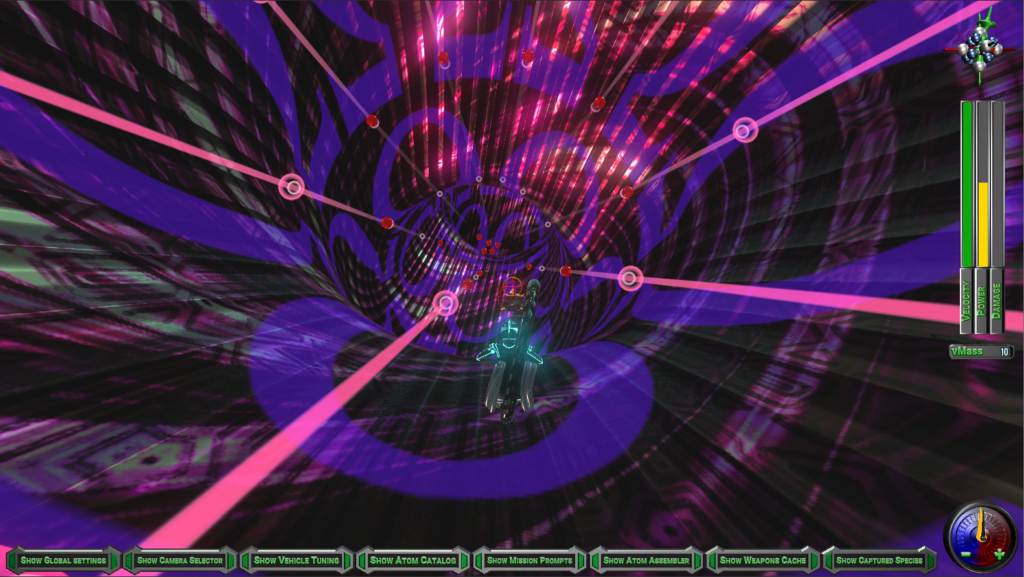 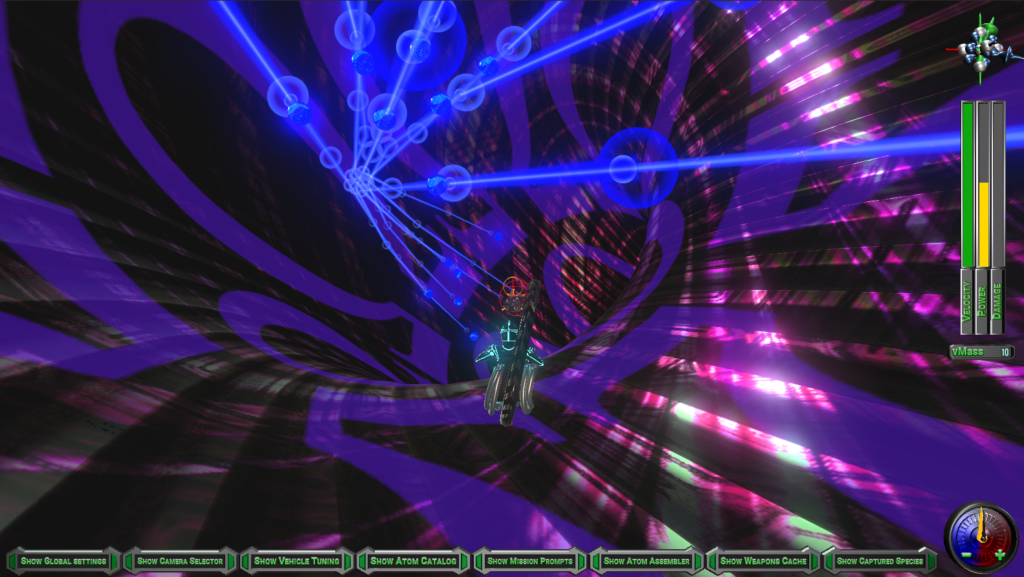 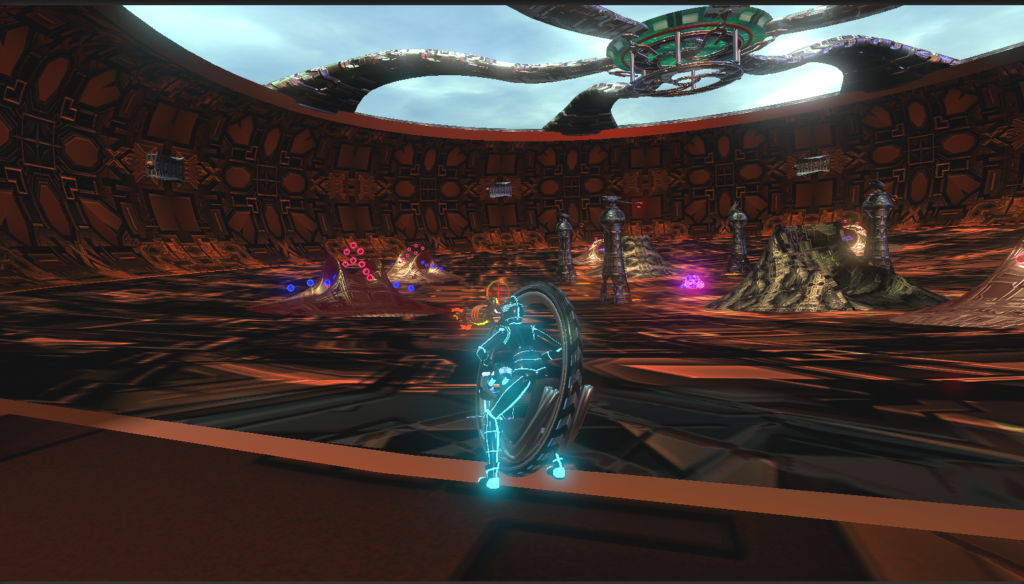 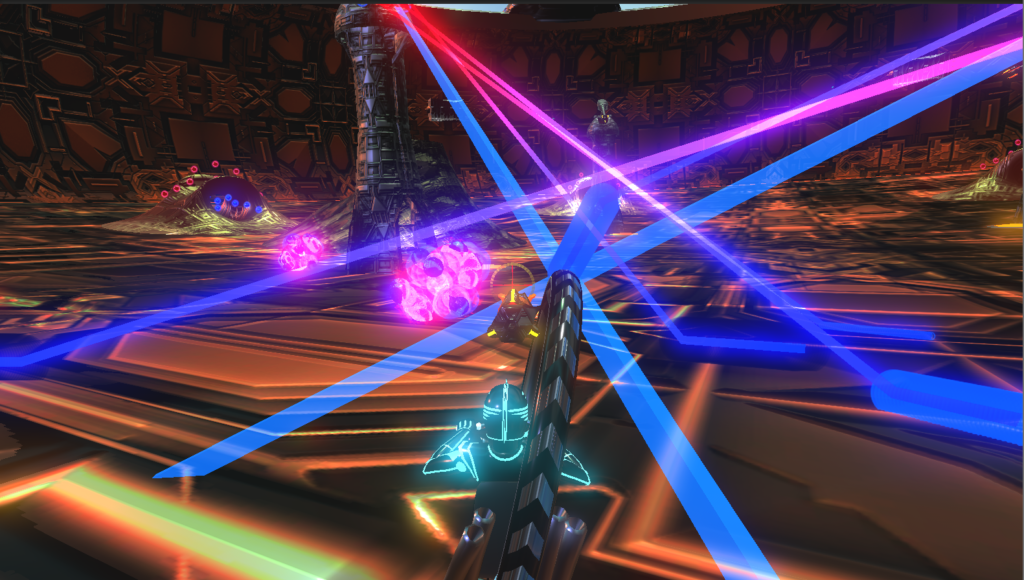 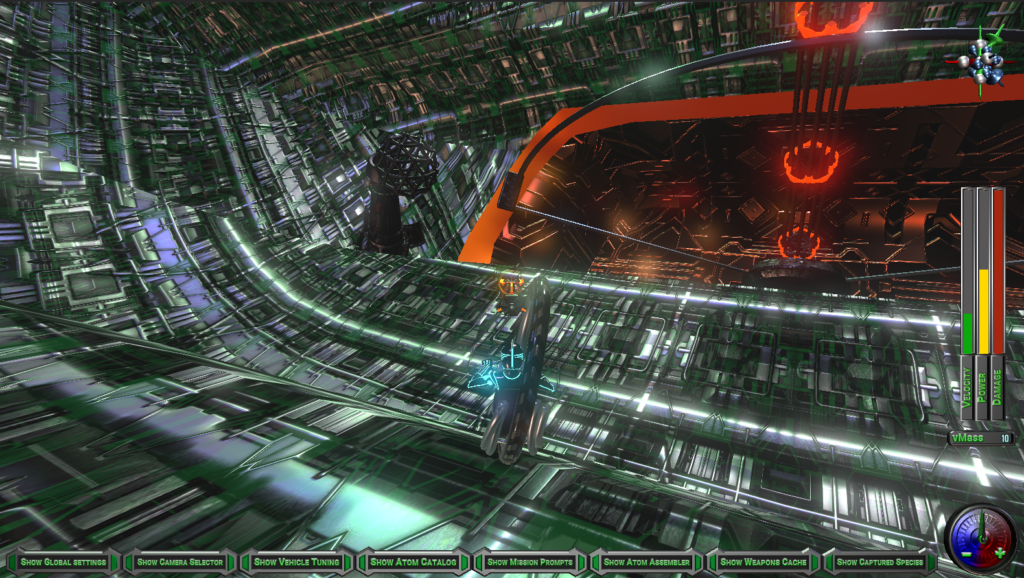 Early adopters to Cyclotronica will get free updates ad infinitum! We invite you to check it out. Our releases are firstly planned for Windows, with X-Box, MacOS, and others to follow as we are able to put builds together. The game is developed on the Unity platform, so we should be able to release on most every platform there is once we get some money and momentum behind us. Be a part of it!

In future updates and expansions to the game, we plan to exploit Schroedinger's Box principles, the generation and handling of Antimatter specimens, exotic Cosmology interactions, Multiplayer gameplay and unique modes of pitting players head to head while simultaneously forcing cooperation through special controls schemes we are developing. We have tons of ideas for how to move this model forward and continue to make even more robust interactions for players to toy with. We also want to continue expanding the behaviors of Atom profiles we've built so that you can deliberately mess up the experiments and get special failure conditions and achievements for fun.

Players zoom through a series of tunnels and arenas collecting subatomic particles - Protons, Neutrons & Electrons, PNE for short - which can be used as stat buffs for Mr. Big's cycle, used in crafting recipes to build Atoms and Isotopes, as raw ammunition themselves, or for special S.C.I.E.N.C.E. Gun modes.

As players build Atoms and Isotopes, they fill up their Periodic Table Catalog, a running tab of all of the Elements they've handled. Cataloged Atoms and Isotopes built by the player are reusable as tools throughout the game. An Atom you construct in one experiment may come in handy in a future experiment. There's a lot to cover in the existing science, but we have worked to put together a continuity of Elements to handle in addition to letting players be completionist and use a surplus of inventory to fill out their whole Periodic Table.

Weapons Cache items are built from the same pool of captured Protons, Neutrons and Electrons, and are useful for combat and experimental interactions. Most of the time, your weapons are being used for their chemical or electromagnetic properties. Sometimes, you're just trying to physically deflect or damage something, other times you may be deliberately using chemistry to eliminate or change the properties of an incoming threat.

Hazards of many kinds exist in the game, including physical obstacles you have to dodge, projectile particle emissions or beam weapons trained on the player, impassable barriers that have to be operated, "hostile" chemical elements or radioactive isotopes, or even gravitic anomalies that will shred the player into oblivion. Good times.

There is a balance to maintain for players: it may be better to hold onto your Electrons for the speed boost, but you might need to save some to build that Electron Beam to operate a device in your experiments; if your cycle is damaged, collecting Protons will heal the damage, and they increase your vehicle mass so that collisions don't knock you off course as easily -- but they make a great missile in a pinch and are absolutely essential if you want to build Atoms; Neutrons also give you mass and help to construct Weapons, Atoms, and Isotopes, but if used as raw ammo, can split larger Atoms outright into fission.